The time it takes to run a simulation is often exponential to the number states (compartments x materials).

Running simulations in batches mean that a model is divided into smaller independent parts which are solved in sequence.

There are two types of batches: those that are completely independent, and those where the second batch depends on the results from the first (but not vice versa).

The example model below consists of four compartments and two materials: 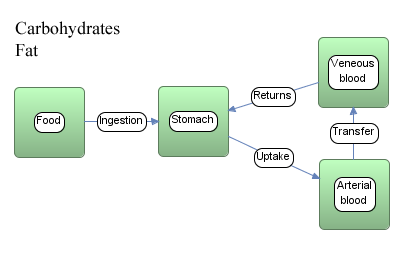 The total number of states are 8:

If we assume that there is no (mathematical) dependence between the two materials in the model above, the model could be seen as two seperate models: one for Carbohydrates and one for Fat. One can therefore safely solve the equations first for Carbohydrates and then for Fat, which would reduce the number of states per simulation to 4.

The option to run independent batches has been available since Ecolego 5.

Sometimes the possible independent sets of states are too few, or the number of states in each is too large.

Dependent batches mean that batches are created as sequences, where the results of each batch is stored so that it can be used as an input to the next batch. In the model above, the Food compartment is not dependent on the remaining three compartments. One could therefore first solve the system of equations for Food, save the results and use them as an input when solving the equations of Stomach, Veneous and Arterial.

There are several caveats to keep in mind when setting up dependent batches: