Mass balance block is used to calculate the difference between the total of inputs and outputs of a system.

Note: In versions prior to Ecolego 8, this functionality does not exist.

From the Projects window

From the Matrix window

From the Blocks window

button, or by double-clicking the right-most “validation” column of the block.

The block editor has three tabs:

This tab lets you edit basic properties such as name, sub-system and base unit. See editing properties for more information.

This tab lets you edit the visual properties of the block in the matrix window and graph window. See editing appearance for more information.

This tab contains the information on the values that the user defines for this block. To select the sources/sinks that should be included in the calculation of the mass balance block, the user needs to move them from the column in the left to the column to the right, in this tab. 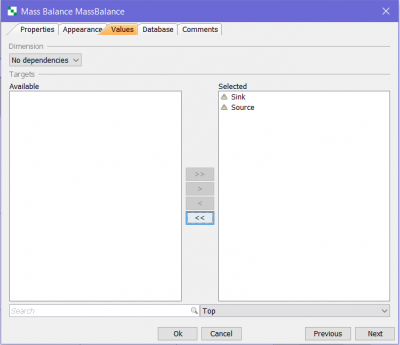 Dimension - The dimension is specified by selecting the dropdown list named Dependencies. Here the user can select the amount of dependencies, which define the number of dimensions that are added to the block. The later appearing dropdown lists define what you want your block to be dependent on (e.g. Materials, Elements, but also custom made Index lists).

This block can be a very helpful tool for testing models that contain a big number of compartments and are using the “non-negative” option. When the user wants to make sure that compartments inventory is not going bellow the 0 value, the “non-negative” field is selected inside the compartment. This is a useful feature of Ecolego, however, if the user is not careful, they can create systems that might have some “false positive input” (where the inventory of one compartment increases, even though it should decrease). When using this mentioned feature, it is important to write proper logical equations inside the transfer blocks connected to these compartments, to take into account of this truncations. To make sure this is done properly, one might want to use the Mass balance block. This block can easily detect if there are any discrepancies of this sort, and show the difference from the excepted output and the actual output of the model.