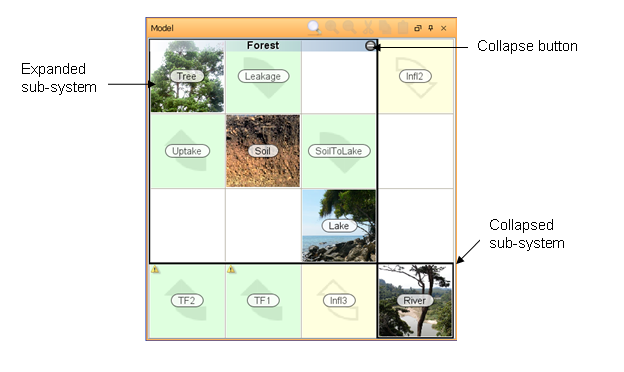 Like groups, sub-systems are containers for blocks and are used to make large models more manageable and understandable. The sub-system also acts as a name space for the blocks that it contains, which means that it will determine the ID of the blocks and guarantee that there are never two blocks inside the same sub-system with the same name. Finally, sub-systems can communicate with other sub-systems through the use of connectors.

Because the sub-system controls the id of the blocks it contains, several blocks can have the same name as long as they belong to different sub-systems.

By defining inputs and outputs a sub-system becomes a stand-alone module. Modules are reusable components that can be easily connected to quickly assemble new models. Modules can be added to and from the module library.

The matrix of the matrix window and the graph of the graph window benefit greatly from the use of sub-systems. A large model, with many blocks becomes difficult to handle if it is not divided into sub-systems. Both the matrix and the graphs let you expand and collapse sub-systems, so that you can choose which sub-systems should be open. Once you have created a sub-system, you can expand it by clicking the

button. In the title bar of the windows you can select which sub-system to view from a drop down menu.

A sub-system can be created in several ways:

From the Projects window

From the Matrix window

From the Graph window

To edit a sub-system, right-click the sub-system in any window and select Edit. In the Blocks window, you can also show the block editor by selecting the block and clicking the

button, or by double-clicking the right-most “validation” column of the block.

The block editor has three tabs:

This page lets you edit basic properties such as name, and sub-system. See editing properties for more information.

This page lets you edit the visual properties of the block in the matrix window and graph window. See editing appearance for more information.

When you delete a sub-system, all its contents – blocks and nested sub-systems - are deleted.

To delete a sub-system, right click the sub-system either in the Projects window or the Matrix window and select Delete from the pop-up menu. A dialog box will ask you if you want to remove the sub-system. Click Ok to confirm or Cancel to cancel this action.

If you simply want to remove the sub-system, but retain all its contents, you can instead choose Destroy sub-system from the menu.

Converting between group and sub-system

A group can be converted to a sub-system and vice versa by right-clicking the group/sub-system and selecting Convert to sub-system/group. Note that if you convert a sub-system to a group, the block’s names might change so that they have a unique name in their new sub-system.